How Root Canals Save Teeth 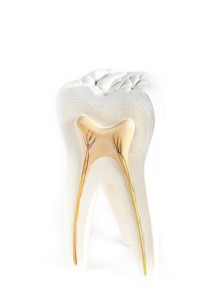 A Root Canal, to many of us, sounds like an excruciatingly painful procedure that we’re better off without. However, little do many people know that a root canal treatment is perhaps the only procedure that can save a grossly damaged tooth. If left untreated, such a carious tooth will only deteriorate further till there is no other option left than to simply extract it from the oral cavity.

A small cavity, such as one that only appears as a white, brown or black lesion on the enamel or dentin in the absence of pain can be restored with simple fillings or even pulp capping procedures. However, when caries extends beyond the margins of dentin and infects the pulp portion of the tooth, a root canal procedure is advised. The pulp contains many nerve ending and blood vessels providing innervations and nutrition to the entire tooth; once this portion is involved in the carious process, the patient generally complains of severe pain that aggravates at night and at times radiates to the entire jaw or temple region. Some patients may only complain of severe sensitivity and discomfort as well. Diagnosis of this condition, also known and irreversible pulpitis, is made after observing periapical radiographs of the affected tooth.

A standard root canal procedure comprises of the following steps:

To eliminate chances of pain and discomfort, the procedure is performed after anesthesia has been administered in the region of the surgery.

You can learn more about root canals and how they play a vital role in restoring a natural tooth in the oral cavity – simply get in touch with our team at Buckingham Dental today!